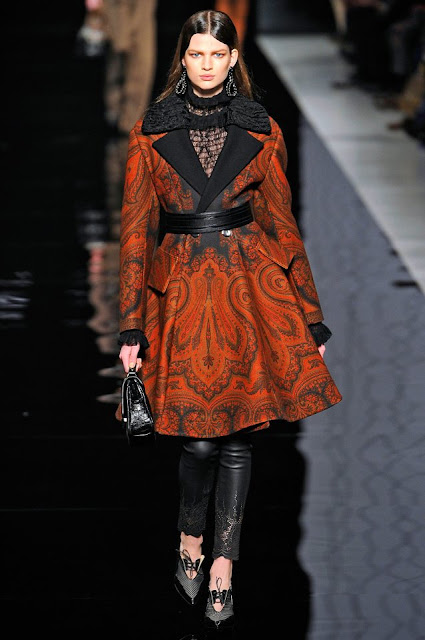 Over-sized paisleys and op-art mosaics were the motifs du jour at Fall 2012 Etro. In a burnished palette of taupe, burgundy, and gray, they decorated every one of the collection's lean-lined looks. They appeared tattoo-like on sheer blouses, kaleidoscopic on peplumed sheaths, and texturally geometric on wide-legged pants. Whip-smart blazers and straight-cut coats in velvet and jacquard lent a jaunty, dandy mood. 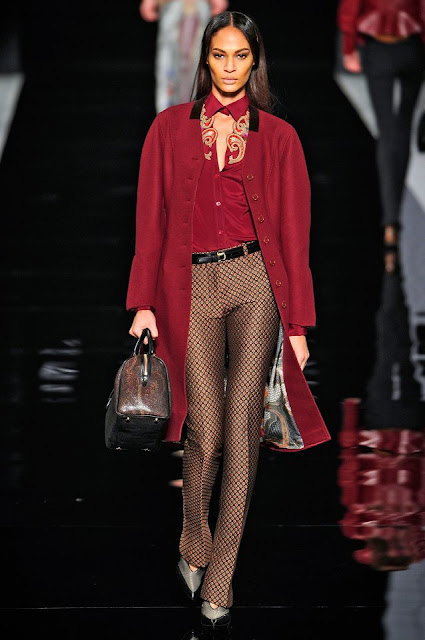 Kean Etro has so successfully established an image for the Etro man—a thinking man with an appetite for adventure—that you kind of feel sorry for his little sister, Veronica Etro, who has had to carve a niche out of nothing. She's looked here, looked there, but she's just been fishing. 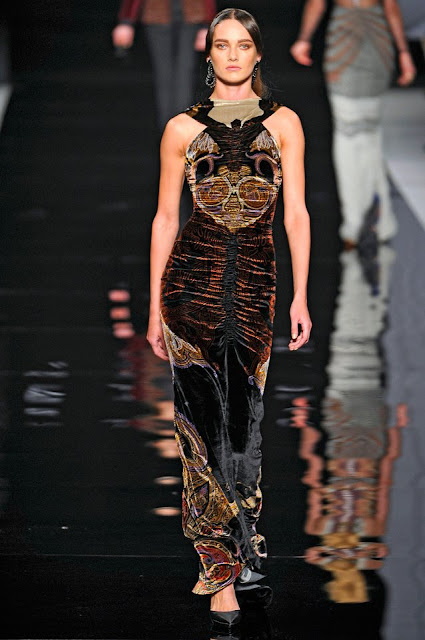 All too rarely has she latched on to something that feels right for the brand. Still, she's getting there. Today's show was a clearly defined statement of intent. Etro's Mitteleuropa dandyism translated appealingly into lean, tailored looks that used the family's signature paisley as a building block. Not in a particularly respectful way, mind. Laser-cut into a patchwork on a net gown, printed on a sheer top, woven into trousers that were legging-tight, paisley proved itself to be a profoundly alluring thing. As alluring, in fact, as a tracery of tattoos on skin. 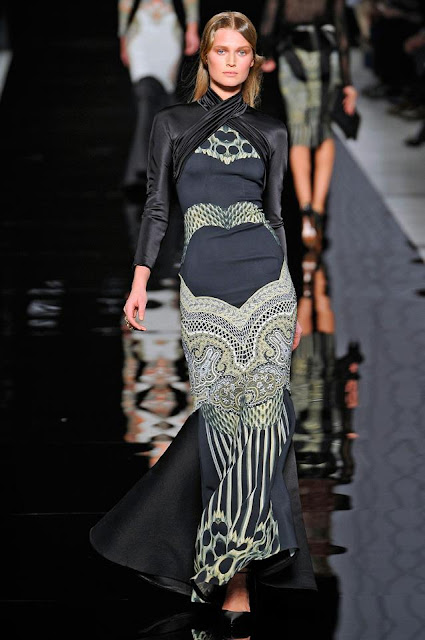 Perhaps it was that sensual association that spurred Veronica on to such extremes as the perforated leather ruff that limned a velvet jacket, or the hard-edged combo of black leather and fishtailed velvet. If there was one word that worked for the whole collection, it was flare. Flare in the leather peplum belts, flare in those fishtailed gowns, flare in the godet skirts. It took discipline to make them all work. Veronica is clearly little sister no longer. 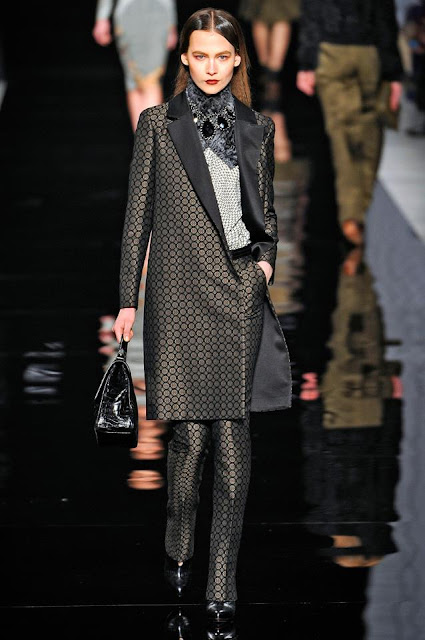 This is the thing about going to the collections; sometimes what can seem like a one-off notion gains traction, and before you know it, it’s shaping up to be one of the more insistent impulses coursing through the shows. That said, it’s not always necessarily because of its prevalence, but because it stands out as something different. 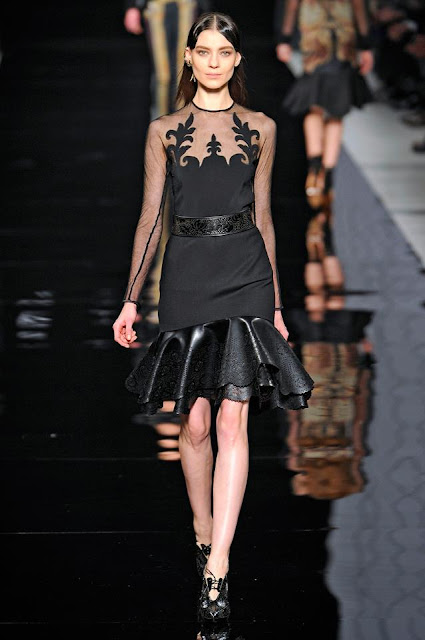 Such is the case with the neo–Edwardian dandy suiting, by way of the sixties and seventies, that made an appearance at Etro, having already strode out with such conviction on a few runways of late that it might as well have been confidently twirling a cane. (These are the women’s collections after all; you wouldn’t expect any twirling of a mustache.) Thankfully, it’s a lot less historicist than it sounds. At Prada, for instance, Miuccia Prada turned it into lean high-button jackets with cropped kick-flare pants worn with nineties club-kid platform shoes. (Shoes are having a very Leigh Bowery/Michael Alig moment right now.) 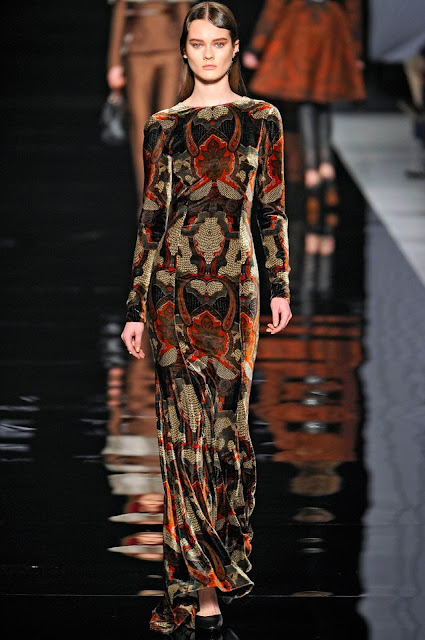 Meanwhile, at Etro, Veronica Etro did it her way, by incorporating it into her new idea of print dressing, a category the house has owned since, well, forever: a longer, leaner, body-conscious line (her killer velvet evening dresses, for instance) that allows for all sorts of interplay with pattern (paisley, specifically) and three-dimensional shaping (peplums-as-belts galore, over pencil skirts). Her foppish tailoring was, she said backstage, a way of feminizing the masculine suit, so she made her jackets—in velvet, jacquard, and tweed—sharply waisted and jutting at the hips, then partnered them with super-narrow trousers. 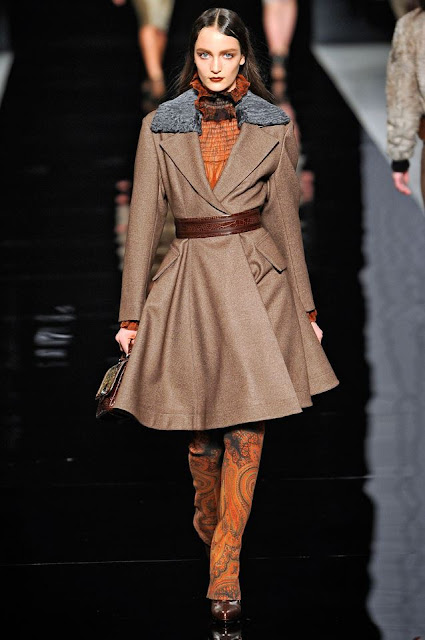 Elsewhere, she buttoned a shapely frock coat over the same pants and turned the gentleman’s silk scarf into a fur collar layered with a sizeable jet necklace. 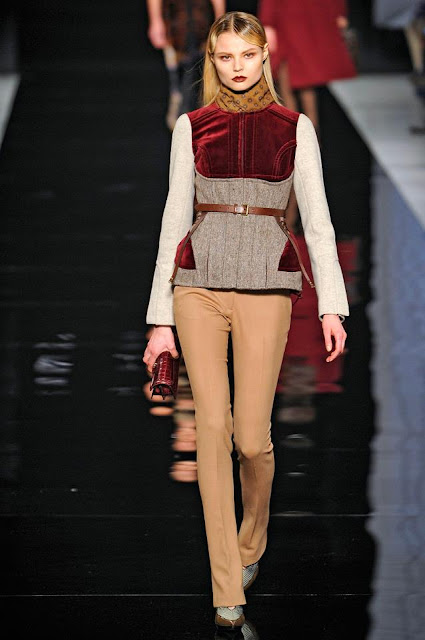 It’s interesting, this idea of transforming men’s suiting, albeit from another era, to make it look so curvaceous. For the longest time, the impulse was to look coolly louche and androgyne in pieces borrowed directly from the boys, but this reverts to the idea of making men’s clothes look distinctly shaped for a woman’s body.
And even more interesting is that that impulse is coming from two female designers with very different viewpoints. Whatever is driving this, one thing is for sure: your boyfriend’s/husband’s/brother’s closets just became no-go zones.
Email Post
Labels: Etro Etro Fall 2012 Etro Runway Fall 2012 Ready-to-Wear Collection Fall 2012 RTW