The Wedding Dress with the Longest Bridal Train Costs $446,000 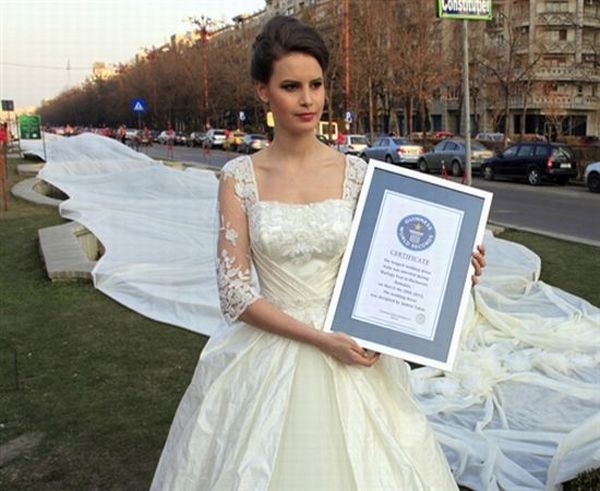 Wedding dresses are special because they are designed for a grand occasion. Some of the designers in order to make it really special make it very expensive. There have been many records broken and broken again for the most expensive wedding dress. There is a new record now made in Romania for the world’s longest bridal train. The dress has been made to promote the 2012 Wedding Fair at Bucharest. The record breaking dress has a bridal train rolling on to 3,000 metres or 1.85 mile.

The dress has been designed and crafted by a Bucharest fashion house. The 1.85 mile long bridal train has broken the Guinness record held earlier by a dress with a 2,488 or 1.54 mile long bridal train. The Guinness officials have testified that the new dress from Bucharest has surpassed the earlier record which was held by a Dutch creation by a safe margin. The unveiling of the new dress was also done in grand manner.
The record breaking dress was unveiled on a hot air balloon floating across the skies of Romanian capital, Bucharest. It is a silk wedding gown that has been enhanced by imported lace from France and taffeta and other fabrics, sourced from Italy. Ten skilled seamstresses worked tirelessly for over 100 days to craft this exquisite gown. Almost 13,000 rare pearls have been studded on the dress making it very classy and elegant but at the same time taking its price up to $446,000.
At the unveiling event Romanian model Ema Dumitrescu wore the dress and the train fluttered high above a main boulevard in Romania’s capital of Bucharest. Andree Salon fashion house has created the dress and had organized the exciting event. Incidentally they are also organizing the 2012 biannual Wedding Fair.
Via: thelook.today.msnbc.msn
Email Post
Labels: Andree Salon Beach wedding dresses Dresses Guinness record worlds most expensive