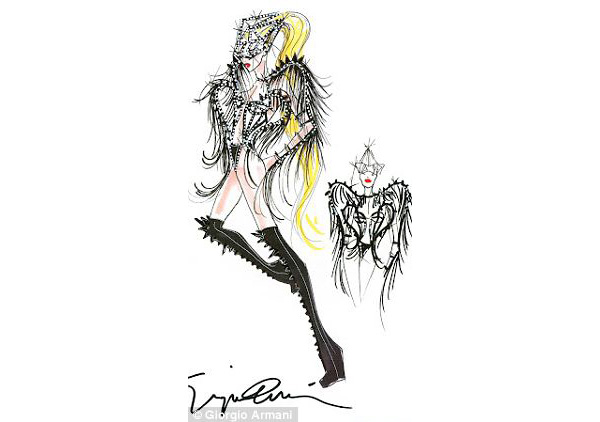 Lady Gaga is back and with a bang! Her upcoming tour ‘Born This Way’ will kick start in Seoul, Korea on the 27th of April. Giorgio Armani will once again  don the hat of Lady Gaga’s chief costumer and create some wacky designs for the singer. Armani has been associated with Lady Gaga for a long time now and has dressed her for several events in the past including the 2010 Grammys.

Keeping in sync with the singer’s rather bizarre sense of fashion, Armani’s has used a generous amount of black crystals and metal studs in the Born This Way wardrobe. Swarovskis will add the much required bling to these costumes. In order to keep the wackiness alive, the collection comes with glass nails, spikes and gloves with mirrored nails. Armani’s also used a generous amount of fringe and the collection also includes a black bodice with transparent Plexiglass. Sketches also reveal a long sleeved floor length shift dress which comes with a hat the shape of a key board.

Lady Gaga’s Born This Way costumes will once again generate as much excitement and sensation as her songs when she will enthrall her fans in Japan, New Zealand, Australia and then Europe. The US dates of the Born This Way tour have not yet been declared. On designing Lady Gaga’s garb for Born This Way, Giorgio Armani stated that, “Collaborating with Lady Gaga was always an exciting experience for me”. He further added, “I admire the way she used fashion as a scenic element and as a means to build a character. She is an artist of many talents and great intelligence”. 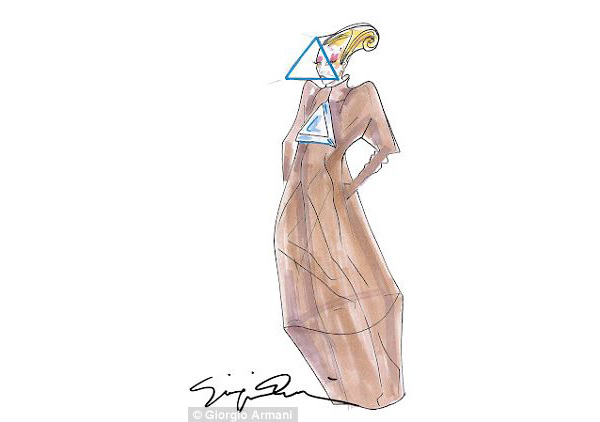 A singing sensation, Lady Gaga, five foot one, is anything but a regular run off the mill fashionista or a diva. Her style statements have very well become the most discussed in the decade. She has dared to appear in public wearing no pants and also conducted a rather audacious performance smeared in blood! Desperately trying to do things differently she once made an appearance concealed in a gigantic egg carried by burly men instead of walking the red carpet like many celebrities would do. Her ‘Meat Dress’ at the 2010 MTV Video Awards created quite a controversy and kept people wondering if it was an offensive or an awesome act? 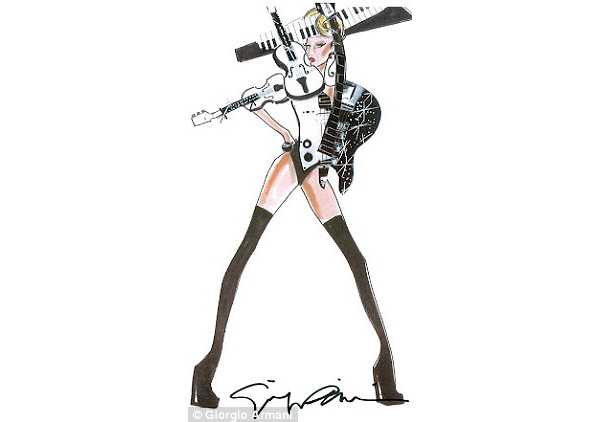 Well, her sense of style may not appeal to many but this 25 year old singer has carved a niche for herself in the fashion world and has single handedly built a larger than life persona. The Born This Way Giorgio Armani costumes will only enhance her astounding image and will be splashed across newspapers , fashion magazines and the internet when the tour kicksoff!!
Via Dailymail